Similarly to the Hofermühle site, various methods are used to explore surface dynamics at the Salcher site. A meteorological station provides information about meteorological parameters. A permanently installed laser scanner has been recording the active area with a daily scan since 2015 - such a high-resolution data series is a novelty in the area of ​​landslide monitoring. In addition, position measurements (GPS and total station) and mapping were carried out at the site on a regular basis. The site was also used as a test area for the use of wireless sensor networks in the area of ​​slow landslide research.

A meteorological station (figure) has been in operation on site since October 2015 and records temperature [° C], humidity [%], radiation [W / m²], wind speed [m / s] and precipitation [mm] (figure 21) . The data is recorded with a measurement interval of 5 minutes, transferred to a server in Vienna and can be called up on the homepage in Monitoring.

TLS recordings were occasionally carried out on the Salcher landslide, which can be used together with other available data sets (e.g. TLS from the GBA from 2007, ALS data from the Federal State Government of Lower Austria from 2009) for time series analyses and quantification of changes in surface height (DEMs of Difference, DoDs). DoDs enable the quantification of movements and thus the indication of rates (how much material has moved when or how quickly from where to where) as well as generally for describing and defining the process itself. Figure 22 shows such a DoD as an example for the period 2009 until 2014. The areas of erosion (blue) and accumulation (red) are clearly visible. The former are clearly recognizable in the terrain as steps and scarps, the latter form a bulge made of pushed-on material at the foot of the slope.

Figure 22: left) Delimitation of the area used for the calculation of a difference model on the Salcher landslide; right) Difference model for the period 2009 to 2014. (Data sets and sources used to create the graph: DEM (1m) 2009: provided by the state of Lower Austria; TLS data 2014-12-02: property of the University of Vienna). Graphics: Stumvoll M.J 2020, modified from Stumvoll & Glade 2019.

In addition, a permanently installed terrestrial laser scanner is installed at the site, which records a daily high-resolution scan of the active landslide area (pTLS). This is a novelty in the field of monitoring such landslide processes. There are few comparative locations where such data exist over such a long period (2015 - ongoing) and with this temporal resolution (daily). Figure 23 shows the area covered by the pTLS on the left; on the right the seasonality of the vegetation cover for 2019 via RGB information recorded at the same time as the pTLS data is shown.

The potential of such temporally and spatially high-resolution laser scanning data has been or is being investigated by the University of Heidelberg as part of the 4DEMON (4D Near Real-Time Environmental Monitoring) project, with the Salcher landslide being one of the study sites involved.

From 2015 to 2019, five so-called sensor nodes were in operation on the Salcher landslide, operating together in a network and registering the smallest changes on the surface (Figure 24).

For the period from 05.2015 - 06.2017, the data were examined for their movement values ​​as well as with regard to so-called "extreme events". Figure 24 c shows the average movement values ​​(the change in the weekly average over time) as an example for the azimuth angle direction of all 5 sensors on the slide. Movements were recorded, and these were also greater in the azimuth direction than in dip and tilt (not shown). The azimuth corresponds to a downhill movement. 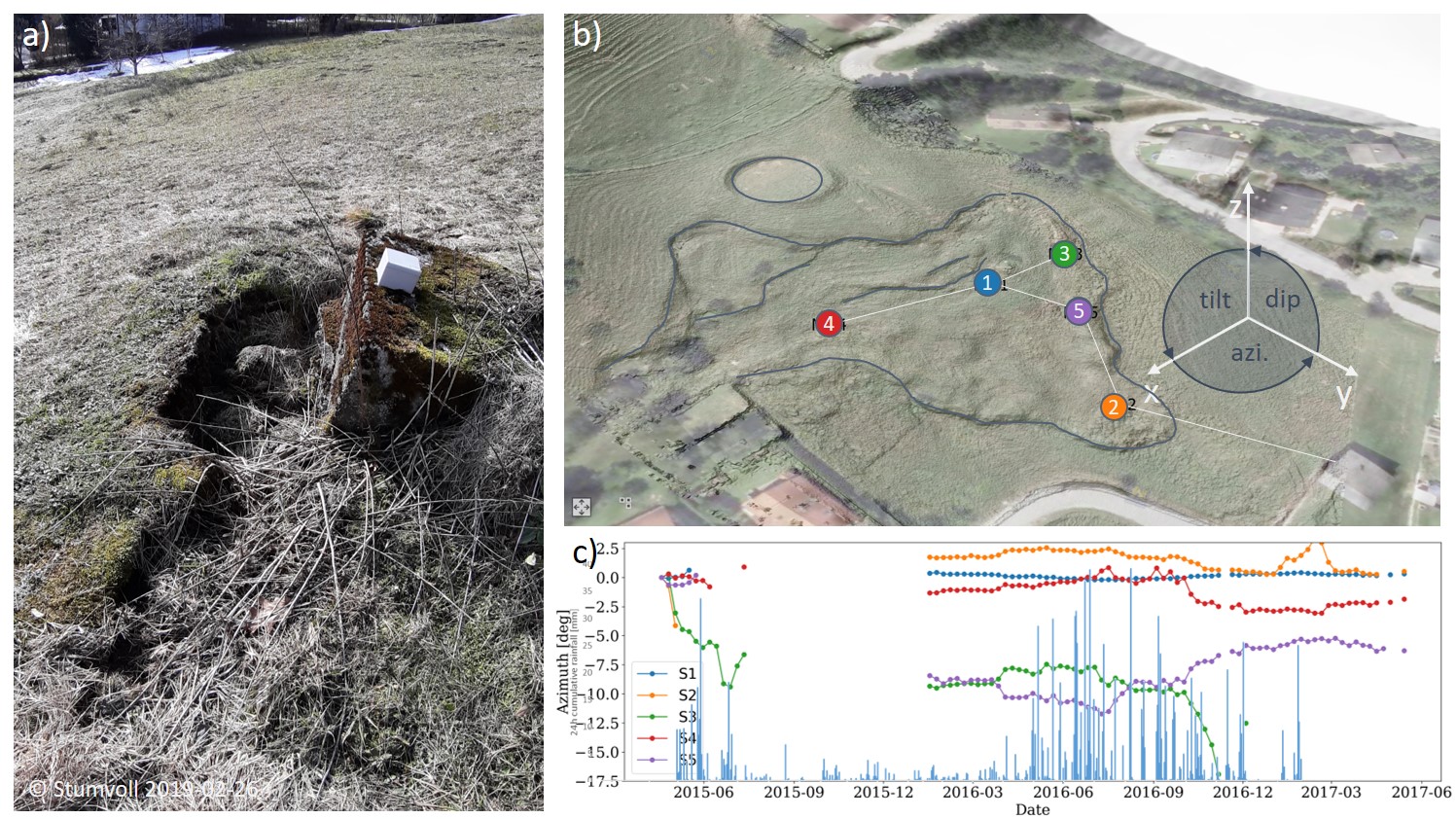 Figure 24: a) WSN sensor node ID1 on the Salcher slide, installed on the foundation of a former ski lift foundation; b) Schematic location of the WSN on the landslide (sensor ID). The coordinate system shows the direction of acceleration of the sensors based on the calculated angles (dip, tilt, azimuth); c) Average movement values ​​(temporal change of the weekly average) of the WSN at the Salcher landslide using the example of the azimuth movement angle in the period 05.2015 - 06.2017; for comparison, the daily precipitation (accumulated) for 2015 and 2016 is also shown. (© Photo see individual notes; data sets and sources used to create the graphic: DEM (1m) 2009 and Orthophoto 2011: provided by the Federal State Government of Lower Austria; TLS data 2014-12-02: property of the University of Vienna; calculations WSN data: Dr. Katalin Gillemot). Graphics: Stumvoll M.J 2020, modified from Stumvoll & Glade 2019.

Precisely at the beginning of the monitoring program, high-precision GNSS and total station measurements were carried out (manually, approx. monthly). In this way, individual structures were recorded selectively and linearly in order to be able to determine possible surface movements over time (Figure 25).

Figure 25: Results of the total station measurements on the Salcher landslide for various time periods in the years 2007 to 2015; were measured i.a. the covers of the inclinometers, the foundation of the former ski lift and the measurement posts of the state of Lower Austria. (Data sets and sources used to create the graph: DEM (1m) 2009: made available by the state of Lower Austria). Graphic taken from Stumvoll et al. 2019, changed.